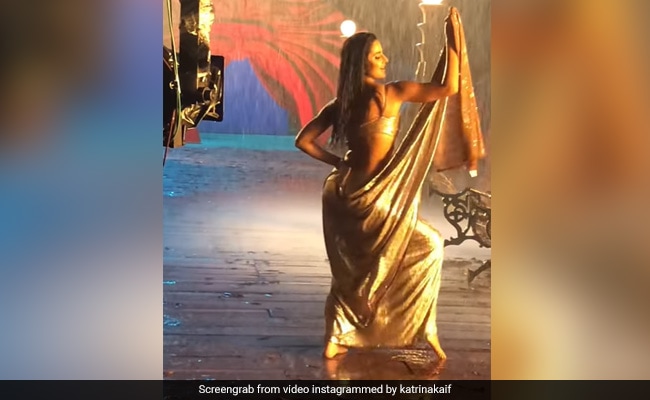 Katrina Kaif in a still from the video she shared. (Image courtesy: katrinakaif)

Katrina Kaif’s dance performance in Sooryavanshi‘s new song Tip Tip is burning up the Internet and how. The actress and Akshay Kumar’s chemistry in Tip Tip Barsa Paani redux has made the song cross 20 million views on YouTube within a day (but more on that later). On Sunday evening, Katrina Kaif posted a BTS clip from Sooryavanshi set, in which she can be seen shooting for Tip Tip, which has been choreographed by Farah Khan. Dressed in a metallic saree, Katrina looks every bit of stunning dancing in fake rain on set. Her killer moves left her fans awestruck. “It sure was rainy,” she wrote in the caption and added: “voice of my (heart icon).” She also tagged Farah Khan in her caption and added an umbrella and smiley emoji.

Tip Tip is the new peppy version of the classic 90s track Tip Tip Barsa Paani from Akshay Kumar and Raveena Tandon’s 1994 film Mohra. The original number is still one of the most popular Bollywood songs of the Nineties.

Earlier on Sunday, Katrina Kaif shared her happiness on Instagram after Tip Tip crossed 20 million views on YouTube within a day. The makers dropped the track on Saturday.

Sooryavanshi has been winning hearts of cine-lovers since it released in theatres this Friday. In his review for NDTV, film critic Saibal Chatterjee gave the film two and a half stars out of five and wrote: “Katrina Kaif pulls off a Tip Tip Barsa Paani rejig with aplomb. But in a film overrun by three larger-than-life cops displaying their wares, a doctor is left with little to do other than negotiate the fallout of a derailed marriage.”