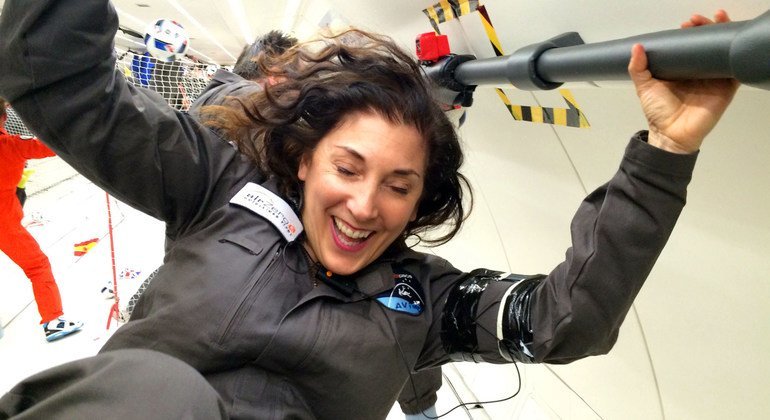 Now, an astronaut coach and the founding director of the Netherlands-based Inner Space Training, the world’s first and only space training to mentally prepare commercial astronauts for flight, Ms. Howard is empowering girls to reach for the stars in the international space industry and pursue careers in the still male-dominated field.

A mentor with the UNSpace4Women Network, an initiative of the UN Office for Outer Space Affairs (UNOOSA), she is helping young women struggling with issues like the “Imposter syndrome” to break through psychological barriers amid enormous expectations.

From all regions of the world, Ms. Howard is one of the 56 women space industry leaders and professionals with the UN mentor programme to create a supportive environment where females everywhere thrive alongside their male counterparts in space science, technology, innovation and exploration.

“It’s about giving girls a safe space to explore things they want to be doing”, Ms. Howard said in an interview with UN News. “Girls of the Instagram-sensitive age are particularly vulnerable to self-doubt. They have a lot of pressure on them to succeed. They often think they’ll fall short, compared to the boys”.

Video conferencing with mentees once a month, she provides educational and career advice, such as interviewing techniques and how to write a good university essay, and introduces the girls to other space professionals.

British-Ghanaian 17-year-old Bethany Addo-Smith and Paulina Texier, a Hispanic high school senior from the United States, were looking for ways to overcome test-taking anxiety, which often plagues women and girls in science, technology, engineering and math (STEM) fields – particularly those of colour under the added pressure of representing their entire ethnic group.

“For these girls it’s a double whammy. It’s harder for them to overcome stereotypes than a white boy who doesn’t have to prove the value of his race and gender”, explained Ms. Howard.

Under her coaching, both girls are mastering their fear of failure.

Mindy Howard signs autographs for girls after giving a TEDx talk at the British School in the Netherlands.

Ms. Addo-Smith scored high on her  exams and was provisionally offered a place in the astrophysics and digital geoscience degree programmes at her dream school, the Royal Holloway University of London as well as a provisional invitation to the University of Leeds’ Physics with Astrophysics programme. Ms. Texier was designated a Hispanic Scholarship Fund scholar and aspires to be an astronaut.

“It’s so satisfying seeing them going for things and then having success”, said their proud mentor.

Although more girls are seeing the possibility of going to space, the number of women employed in the international space industry represents just 20 to 22 per cent of the workforce, according to figures released by the UN – roughly the same proportion as 30 years ago.

Only 11 per cent of astronauts have been women, only 2 per cent of whom  have not been white.

Ms. Howard says closing the gender gap in the spdubaace sector requires a paradigm shift in which girls develop competitive skills and learn about female heroes in STEM fields.

“If a girl doesn’t study these things in school, she’s not going to be thinking about how to become an astrophysicist”.

The space sector’s survival-of-the-fittest mentality has historically disadvantaged women, people of colour and people with disabilities.

Replacing this mindset with an inclusive, diverse culture that values teamwork and emotional self-awareness over individual achievement and fearlessness not only helps women and girls excel but will also be crucial for real-time problem-solving during future long-term missions to the Moon and Mars, according to Ms. Howard.

“Who would you rather go to space with? Someone who cares only about himself and is not very communicative, or someone who sees you as just as important to the success of the mission, as himself?”, she asks, adding that boys and men need to be taught collaboration and empathy.

“When men see the value of such feminine traits in the workplace, and see that astronauts and others in the space sector are chosen on those traits and what women can bring to the table, they will start to value women more”.

At a Space4Women expert meeting, held from 21 to 22 October in Dubai, Ms. Howard and others discussed how to strengthen women’s role in the field, particularly in leadership and policymaking.

The meeting aimed to promote gender equality and empowerment in line with the fourth Sustainable Development Goal (SDG 4) of quality education and SDG 5 on gender equality.

One proposal was for a global index to encompass the scope of female mentoring programmes and the percentage of women in entry-level management positions and measuring and ranking countries’ progress in STEM studies and careers.

Such a scorecard could provide the impetus for systemic improvements, Ms. Howard said.

“You can start to drive change and tell underperforming countries, for example, what to focus on.  If they see themselves at the bottom of the index, then countries will want to take action”.

While helping young women achieve their goals, Ms. Howard – who made the “highly qualified astronaut candidate list” of the US National Aeronautics and Space Administration (NASA) – continues to pursue her own dream in her adopted country, the Netherlands.

“I’ve dreamt about going into space for as long as I can remember. I had no idea how I was going to get there, but I knew it was going to happen one day”, she said.

Today, she is talking with several companies and individuals about training, coaching and accompanying commercial astronauts on suborbital missions – and becoming the first Dutch woman in space.