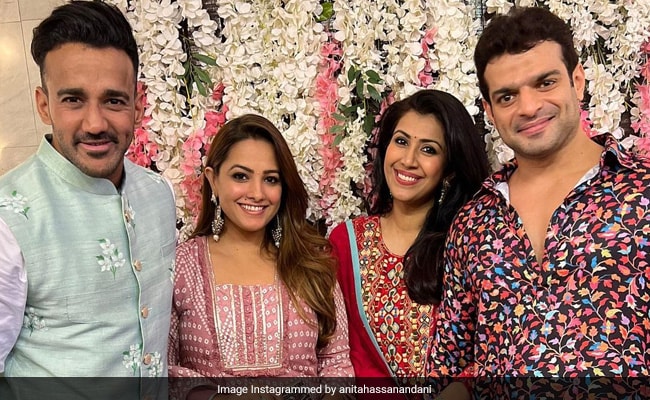 Anita Hassanandani has shared a post dedicated to her loved ones. The actress has picked some pictures from the Diwali festivities featuring herself, her husband Rohit Reddy and their friends, actor Karan Patel and his wife Ankita Bhargava Patel. First up is a happy frame in which we see all of them smiling at the camera. Next one is a selfie moment shared by Karan and Anita Hassanandani. And, the last photo has producer Ekta Kapoor and Anita Hassanandani posing for the lens.  Along with the bunch, Anita Hassanandani wrote, “With my loved ones.” Ekta Kapoor was the first one to drop some red hearts under the pictures. Actress Gauahar Khan found the upload “beautiful”. Ankita Bhargava Patel also replied with a bunch of red heart emojis.

Anita Hassanandani and Karan Patel have worked together in the hit TV serial Ye Hai Mohabbatein. Take a look at the pictures here:

And, we have some pictures of Anita Hassanandani and Rohit Reddy captured during the festival of lights. Here, the actress calls Rohit her “watchman”. She wrote it in the caption. “Haayyeee merra, watchman. Hamare tumhare sabke liye hai Happy Diwali.”

Anita Hassanandani shares a special bond with Ekta Kapoor. We have often seen the two appearing on each other’s timelines. A while back, the actress had penned a note of gratitude to her Rohit Reddy and Ekta Kapoor. Calling them her guardian angels, she wrote, “It doesn’t often happen when you find someone who means everything to you. You feel more appreciated and spirited with them around you. Today, I would like to thank my two guardian angels for always watching over me, Rohit Reddy and Ekta Kapoor. I would like to say something to them, “Agar tum na hoti, to aaj main iss mukaam par bilkul nahi hoti. [Without your support, I wouldn’t have achieved what I have today].”

Here is the complete note:

Anita Hassanandani is known for her role in the TV serial Naagin.