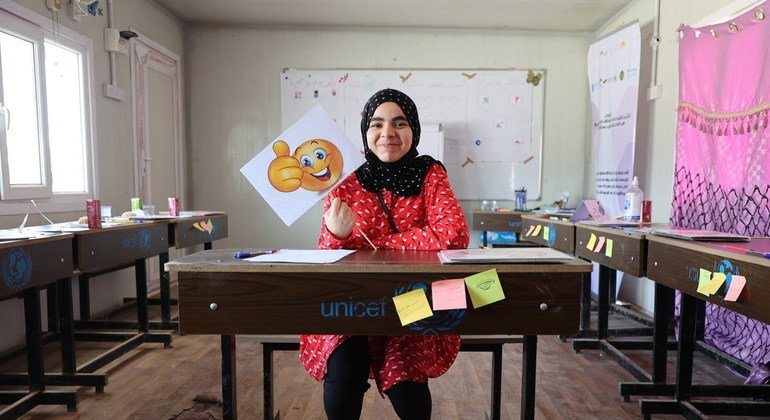 When COVID-19 closed schools in Basra, southern Iraq, the academic prospects for many schoolgirls were put at risk. On International Day of The Girl Child, we look at  a UN program which is helping girls in the region to keep learning.

The 2,570 primary school children from Basra’s Shatt al-Arab district who are involved in the trial project from the UN Children’s Fund (UNICEF) and the World Food Programme (WFP), receive a cash stipend to support their education.

“This will help me achieve my dream of becoming a dentist,” says 12-year-old Baneen, whose family were able to buy her own mobile phone with the money from the programme: mobiles phones were a popular choice amongst the families involved in the project.

“The mobile phones have been helping with online study”, explains Principal Zainab Karim, a headteacher in Basra. “Many schoolchildren live in the same home as several other children, and share the same phone as their moms and dads. The students benefit from having their own phones. If they don’t need a new one for e-learning, the families can use the money to pay for transport, daily expenses, or clothing.”

This year, for the first time, the UN agencies have also introduced the ‘Shatt al-Arab Coding Club for Girls,” which enables the girls in the project to study in a safe environment, learn new tech skills, and innovate to create digital solutions. The students are proud to be part of the first club of its kind in Iraq. “The sessions have taught me a lot, and they’re also fun”, says 12-year-old Narjis. “Also the idea of mixing education with play works because we usually grab our phones for games. Here they include educational games”.

When girls stay in school and complete their education, their expanded opportunities help avoid them marrying or working too early. The project partners are currently working on a campaign to win hearts and minds to continue educating girls through the pandemic and beyond, and putting into practice the saying, “If you educate a girl, you educate a nation.”

Narjis, a girl student in Basra, Iraq, who benefits from a UNICEF/WFP education stipend programme